The superior performance of PSJ’s tutors is quantitatively demonstrated, using objective and independent criteria: proving the immense difference made by the tutors of PSJ Tuition, in enabling the achievement of higher academic grades by our students.
We determine the increase in grades per student for each subject that they study with us, using the following Methodology. It is objective, as all academic measures concerning grades are based on figures issued by organisations which are not controlled by PSJ. Two measurements are used. 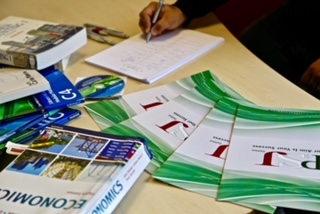 The number of hours of tuition provided by PSJ Tuition is then used to determine the improvement in the student’s performance achieved by us, per hour of tuition delivered by PSJ Tuition. An average number of hours of PSJ Tuition per uplifted grade is then calculated. To take full account of any influence that the school, college or University could have had, or any change that might have occurred if the student had worked very hard on their own, we gathered data on all predictions and final grades for three classes of GCSE Maths, Business and Sciences students in 2014. In each class, PSJ Tuition was working with either three or four students.

By comparing the average improvement across the whole class in each subject with our students who are in that class we deduct 25% of the measured improvement, and therefore our figures cautiously assume that our tutors “One-to-One” tuition is only given credit for 75% of the improvement in grades. This is very conservative, as our previous research in 2014 found that schools/colleges only achieved approximately a 7% improvement, on average (above). We believe that this reduction is rather generous, and penalises our results unnecessarily.

Our aim is your success

Who we are
Testimonials
Our methodology
Results